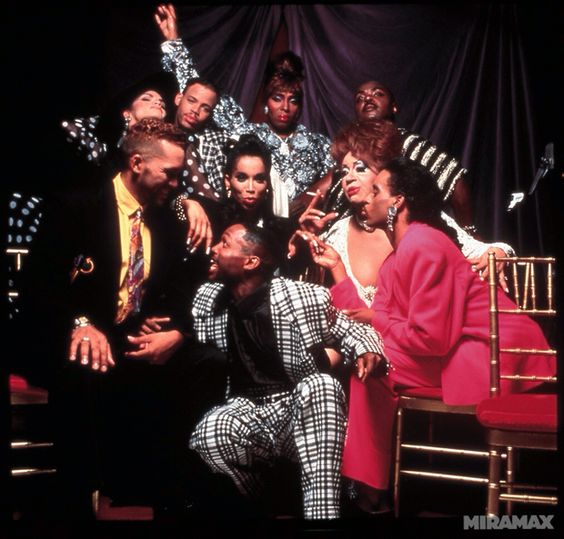 The drag ball scene is  fascinating subculture that illuminates themes of race, gender, and sexual orientation within society. Balls are competitions that consist of individuals, often drag queens, who perform different drag genres and categories. Drag refers to the practices of one gender dressing in the clothes typically worn by the opposite gender and often adopting the conventional mannerisms of that gender. Drag queens and kings develop a drag persona, adopting a drag name and cultivating their unique style and attitude; for example, Andre Mizrahi, member of the House of Mizrahi, uses his talent for choreography and fashion to become a voguing legacy on the ballroom floor.

Ball culture emerged in the 1920s in and around New York City. At their beginning, performers consisted mainly of white men putting on drag fashion shows. Black queens rarely participated, and when they did, they were expected to lighten their faces (Cunningham 1995). Fed up with the restrictive and racist ball culture, the queer black ball community established their own underground ball culture in the 1960s. Ball culture in the 1960s contained very few categories, with primarily queens portraying Las Vegas showgirls. However, New York’s Stonewall Riots of the late 1960s, when queer people of color stood up to police, “changed self-perceptions within the subculture: from feeling guilty and apologetic to feelings of self-acceptance and pride” (Balzer 2005:114). The 1970s saw an expansion of ball participation as balls increased their numbers and types of categories to allow inclusivity and involvement of everyone (Paris is Burning 1990). Balls became a safe space for queer youth of color, mainly Blacks and Latinos/Latinas, to express themselves freely. 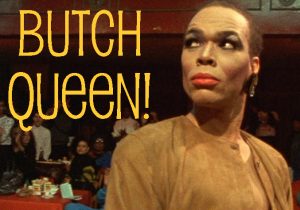 With this new realm of ball culture came the development of competition. The competitions consist of an entire language of concepts, categories, dances, and slang that are unique to the subculture (Phillips II, Peterson, Binson, Hidalgo, and Magnus 2011:517). Participants “walk” or “compete” on a stage or runway for prizes, displaying their outfit along with their persona for different categories. The performances consist of strutting, dancing, and spoken word. Performances are judged by one’s fashion, appearance, and dancing. One common category is “Realness,” where participants in drag are judged on their ability to “pass” as heterosexual males or females. Other common categories include business executive, best dressed, and butch queens in pumps. Not all performances consist of cross-dressing; a few common categories include females highlighting their femininity and males highlighting their masculinity. Voguing, the dance made famous by Madonna’s hit song Vogue (1990), actually originated from ball culture in the 1980s. Voguing categories quickly became popular in the ball community. The dance utilizes stylized arm movements, sharp poses, and fast, low to the ground foot movements. Overall, “the spectrum of identities performed on the floor, and the craft and spectacle of the performances themselves, move to center stage the routine labor of self-presentation” (Herzog and Rollins 2012:10). Ball participants use their performances to communicate specific information about themselves to others. The balls create a welcoming, non-critical space for the queer community to construct their sense of self in their own hidden world free of the constraints that mainstream society puts on gender and sexual expression. 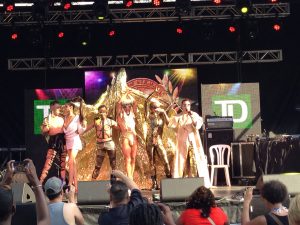 House of Xtravaganza performing at the Pride Festival in 2014

Ball culture consists of unique values, and social structures. In the 1960s, with the revitalization of ball culture, many of the participants could not openly express their sexuality and gender identity within their biological families. To fill this void, groups called “houses” or “families” emerged. Houses serve as many ball participants only source of family (Herzog and Rollins 2012:9). Many queer youth join balls at a young age, and sometimes live with their houses if they cannot safely live with their biological family. “These alternative families are led by “mothers,” who are mostly butch queens (gay men) or femme queens (transgender women) or “fathers,” who are mostly butch queens or butches (transgender men)” (Bailey 2011:367). Houseparents serve as the heads of the houses and are role models and mentors for their “children” (Bailey 2011:367). Children often take the surname of the house parent; for example Pepper LaBeija, a previous housemother of the House of LaBeija, changed her last name when she joined the house. The houses compete in balls together, developing a style of their own. Hierarchies both within houses and competitive realms exist; certain drag queens and houseparents are legacies and idols within the community. Pepper LaBeija says that ball fame “is as close to reality that [they] will get to fame and fortune” (Paris is Burning 1990). Becoming a legacy within the ball community is their ultimate fantasy (Paris is Burning 1990). 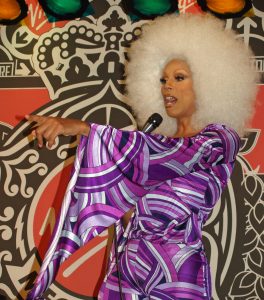 Underground ball culture, while still prominent as a subculture, has also come into the mainstream eye through TV shows and drag clubs. The process of underground balls seeping into mainstream culture can be understood by examining the career of drag queen RuPaul. The Afro-American drag queen RuPaul is known for his award winning show, RuPaul’s Drag Race, a reality competition searching for the next drag sensation. However, he began his drag career performing in the underground ball circuit and living with fellow homeless drag queens in New York City. However, in 1993 he captured the mainstream eye when his music video “Supermodel of the World” aired on MTV. This performance along with others, including Madonna’s Vogue (1990), marked a change in style and behavior of drag, that helped lead to the increased popularity of drag performance (Balzer 2005:116). Drag catered to the mainstream eye, as clubs showcased drag queens performing (not competing) to the most popular pop songs of the time. During the late 1990s, drag performances gained international hype, as RuPaul became known as an international icon (Balzer 2005:111). Likewise, ball culture has spread all across the country; “Currently, there is a ballroom scene in almost every major city in North America” and there are over 100 active houses (Bailey 2011:368). While ball culture has become more popular throughout the world, it still primarily consists of disadvantaged groups and represents non-mainstream values; thus, it should not be considered post-subcultural: a theory posed by scholars suggesting that subcultures no longer differ from mainstream culture. For more information of post-subcultural thought see the page, What is a Subculture?

Drag ball culture actively resists the dominating cultural norms of society. Participants in the community create a new space to directly challenge traditional gender roles and heteronormative identities. They use balls to express these restrictive categories and to reveal their abuse as transgender, gay, and minority groups. Houses provide a space for queer youth to feel supported (Bailey 2011). The balls resist these gender norms by gender-bending through both the outfits and the mannerisms of the queens and kings. For example, on the right is a picture of Pepper LaBeija, arguably the most well known queen of the Underground Harlem Drag Balls. Pepper uses the pronoun she, but primarily dresses “like a man” during her normal life. However, during the balls, Pepper defies traditional gender norms, wearing feminine clothing and makeup. The balls and houses provided safe spaces for people like Pepper LaBeija to express themselves through various types of gender performances that often deviate from dominant societal norms. 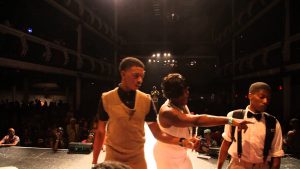 Schoolboy Realness at Latex Ball in 2014

Drag ball culture both resists and conforms to gender and sexuality norms. The realness category shows how the participants work to perform certain roles, for example a straight business executive, so as to stay safe on the streets. They can be “real” with their queer identities within their community. However, they also practice “passing” as straight individuals during their performances. The realness category provides a space for queer individuals to practice conforming to traditional gender norms. Pictured to the left is the category Schoolboy Realness. Watch full video at: https://www.youtube.com/watch?v=nf1UAAeztK4 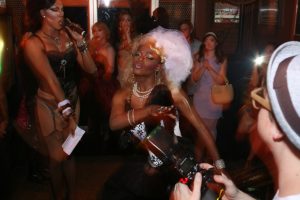 Race and the Civil Rights Movement

Black-dominated underground ball culture emerged alongside the civil rights movement. However, many civil rights leaders condemned and attacked black queer culture. Leaders sought to suppress non-heteronormative behavior, as dominant white culture would better accept and integrate the black community if they fit the heterosexual narrative. This is an example of collective impression management. The African-American working class more openly accepted and showcased homosexual behavior compared to the black middle class. “Black homosexuals came to represent all the elements of African American working-class culture that civil rights leaders identified as obstacles to the attainment of citizenship. At the height of the movement for integration, black queerness was replaced in public discourse and popular culture by black heteronormativity” (Russell 2008:103). The polarity of the black community in regards to the civil rights movement and queerness created a persistent struggle for queer black Americans to fight for their rights as both black and queer individuals.

A popular documentary illustrating the lives of femme queens living in New York City participating in the ball circuit and ball houses.

Clip from Paris is Burning on Realness

A video of a contemporary ballroom voguing competition at Vogue Knights.

An example of a drag performance on RuPaul’s reality TV show, RuPaul’s Drag Race. The contestants “Lip Sync For Their Lives” by competing in this lip-syncing competition to determine who stays on the show.

A collection of black and white photos depicting the vibrant drag ball culture of New York, Philadelphia, Richmond, and Washington D.C. The book contains the essay “The Queer Undercommons,” by Frank Roberts and an interview with Photographer Gerard Gaskin: https://vimeo.com/78295592

A document illustrating how sexuality and race manifested in the Ballroom Scene of NYC, using photography by Chantal Regnault and interviews with key figures from the movement.

RuPaul. 1995. Lettin’ It All Hang Out. New York City:Hyperion Books

An autobiography of the well-known African-American drag queen RuPaul, that delves into what life was like growing up in the New York drag scene.