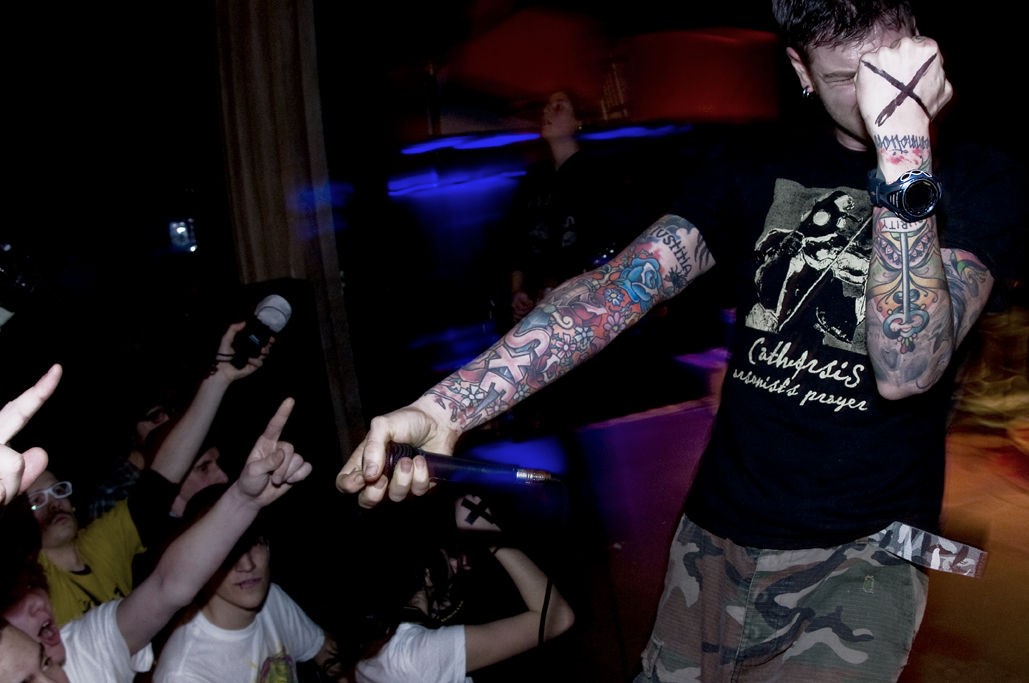 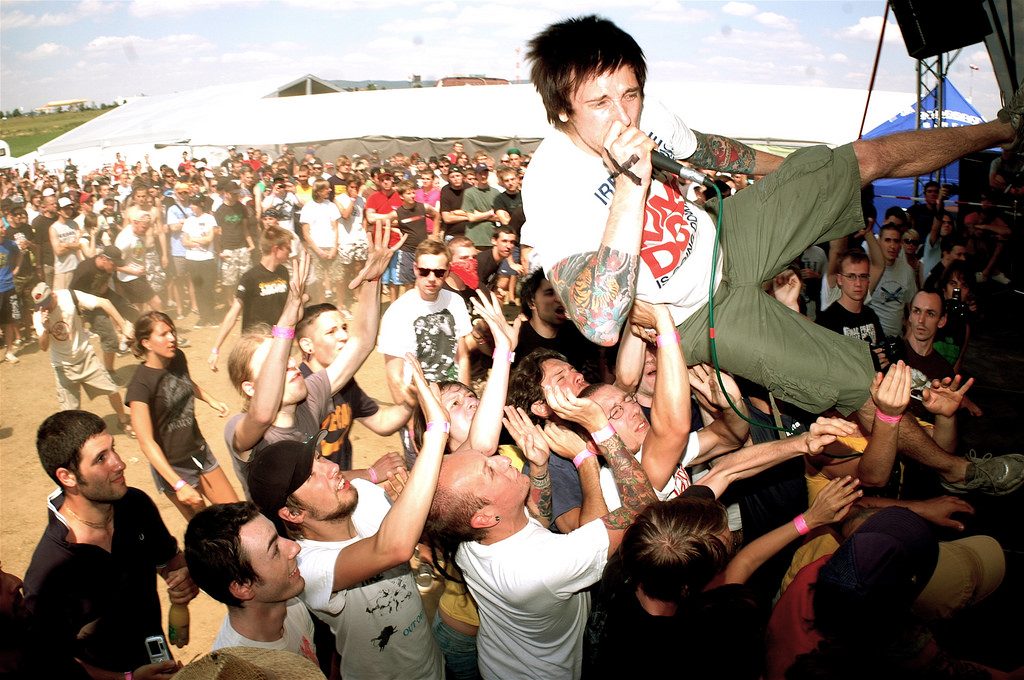 By 1980, punk rock, one of the most innovative and confrontational music and art movements of the modern era, was careening towards the “No Future” refrain from the Sex Pistols’ anthem “God Save the Queen.” Pistols bassist Sid Vicious had died/committed suicide of a heroin overdose and a year later the Germs’ Darby Crash did likewise. The romantic “live fast, die young” mantra was increasingly becoming a grim reality, as many punks piled hard drugs on top of abundant booze, glue, and weed.

Yet from punk came hardcore, an aggressive, fast, stripped-down style inspired by pioneers such as Black Flag, Circle Jerks, Fear, and Bad Brains. And hardcore would quickly spawn a counterculture within the punk counterculture, kids who believed true punk revolution lie in not using drugs, in not drinking oneself to death. Despite its seeming anti-rebellious rebellion, straight edge punk persists as a vibrant element of many music scenes and as an important culture in its own right. 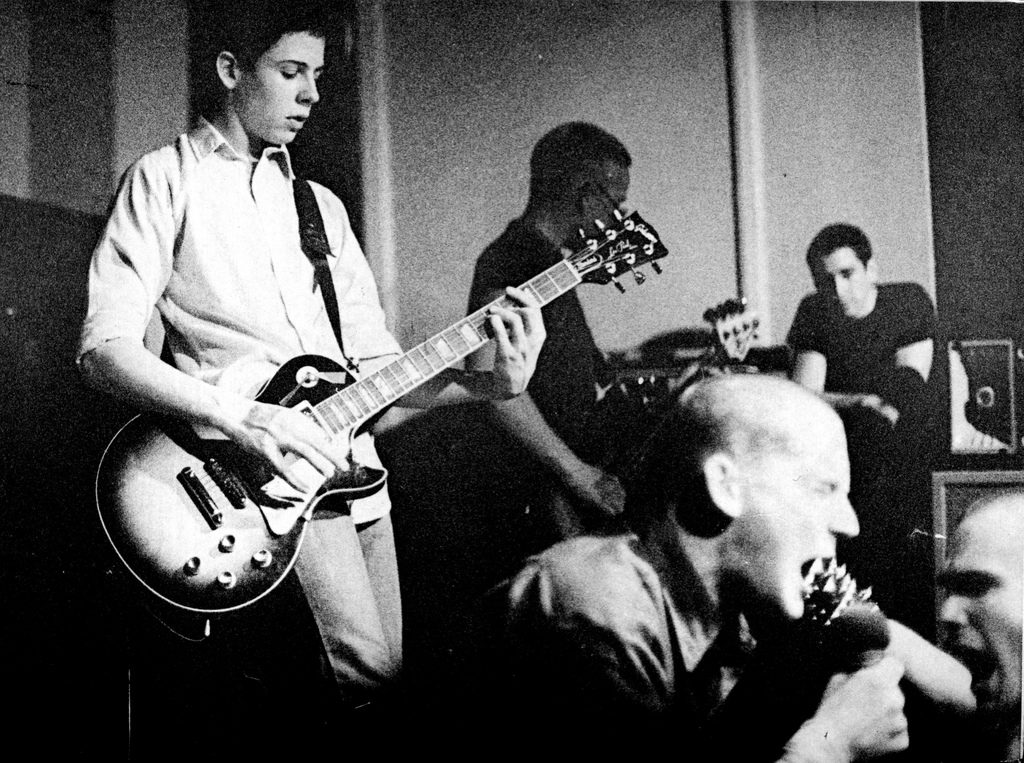 Straight edge (sXe) emerged in Washington, D.C., around 1980 as a response to the hedonistic and nihilistic tendencies in the punk scene (Haenfler 2006; Wood 2006). Some punks were drawn to the punk scene’s innovative music and art, anti-authoritarian politics, and DIY ethos but were skeptical of the prevalent substance use/abuse, seeing drugs and alcohol as self-destructive and pacifying. Hardcore band Minor Threat coined the term in the song “Straight Edge” and inadvertently outlined its credo in “Out of Step” with the lyrics “(I) Don’t drink. (I) Don’t smoke. (I) Don’t fuck. At least I can fucking think.” Minor Threat’s singer Ian MacKaye claimed that being “straight” (drug-free) gave one an advantage, an edge in life. Straight edge became a lifetime commitment to abstain from alcohol, tobacco, illicit drugs and “promiscuous” sex. By 1986, what had begun as an aspect of the punk scene developed into its own movement, with sXe bands such as Youth of Today and BOLD actively promoting “clean living.” Since then, sXe has spread across the world, from Sweden to South Africa, Japan to Brazil.

While straight edge holds different meanings to many different people, a lifetime commitment to abstaining from drugs, tobacco, and alcohol remains the cornerstone of the movement: no drinking, no smoking, no recreational drugs. Many also speak out against “conquest” sex, or using others for temporary gratification. Beyond these basic principles, adherents have blended straight edge with other lifestyles and ideologies. Many adopt vegetarian or vegan diets. Some avoid caffeine. Others combine their straight edge identity with (usually) progressive politics such as anti-fascism/racism, feminism, and animal rights. But substance-free living remains the bedrock of straight edge culture, a promise meant to be for life.

While straight edgers (sXers) exist in many music scenes, and some have little or no connection to music, many are or were connected to the hardcore scene. Hardcore – originally, “hardcore punk” – emerged in California (e.g. Black Flag), Washington, D.C. (Bad Brains), and New York (Agnostic Front) in the late ‘70s and early ‘80s as a faster, more aggressive style of punk, and has since become a global genre (Haenfler, 2015). It encompasses a variety of musical styles, but tends towards screamed or shouted vocals, relatively short songs, few guitar solos, and anti-commercialism. Straight edge, like underground punk and hardcore, fiercely advocated a DIY ethic. Bands performed at “shows” versus concerts, small all-ages venues with low door prices and less distance between audience and performers (both physically and figuratively). 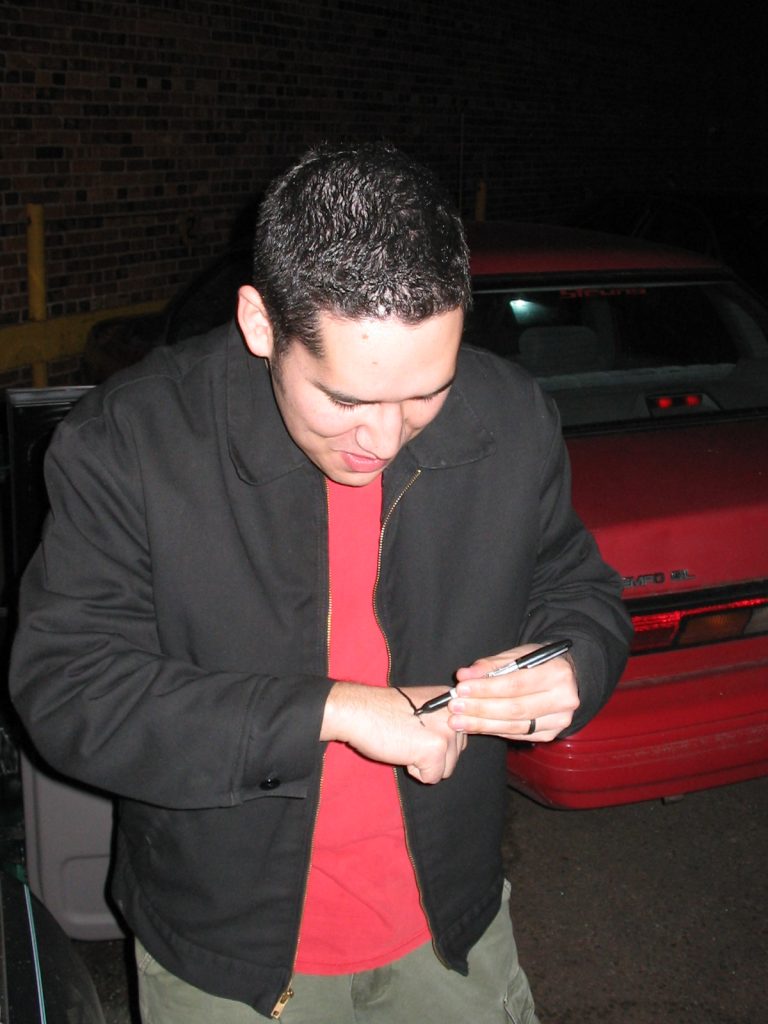 X-ing up before a show. Photo: Ross Haenfler.

Adherents of straight edge are most recognizable when they “X up,” drawing a black X on their hands with a felt tip pen. The X began its march towards becoming the universal straight edge symbol via the cover of the Teen Idles’ Minor Disturbance ep, which features crossed hands each marked with a large X, and it reappears on countless straight edge records. Originally meant to distinguish underage fans at shows so they would not be served alcohol, the X became a sign of defiance to self-destructive punk and an intoxicated culture more generally. While not every straight edge person walks around with X’d-up hands, many have X (or other straight edge related) tattoos or wear shirts with X designs.

While most adherents in the US are white and tend to be middle class, there is significant regional variation; Latin@s have a strong presence in Los Angeles, Chicago, and New York, and many urban scenes and more diverse in terms of class and race, if not gender. The scene remains cis-male-dominated, though many women identify as sXe in spite of their marginalization (Haenfler, 2004; Mullaney, 2007) Despite their conservative lifestyle, manysXers are politically progressive, with participation in animal rights, anti-fascist, and ecological movements relatively common and many 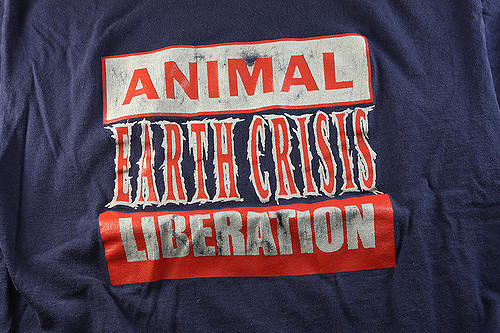 adopting vegetarian or vegan lifestyles. While many sXers eventually leave the hardcore scene and abandon their drug-free commitment (commonly referred to by sXers as “selling out”), a substantial number remain sXe into their thirties, forties, and beyond (Mullaney, 2012).

The live performance is where straight edge hardcore truly shines. The frenetic chaos of the punk circle pit reached new levels as hardcore kids incorporated kung-fu kicks, maniacal stomping, and acrobatic stage dives into their moshing repertoire. During the most transcendent hardcore shows the band and audience are virtually indistinguishable, as kids literally crawl over one another to sing into the mic, and divers burst onto the stage before catapulting into the melee below.

Despite a few high-profile straight edgers – professional wrestler CM Punk, pro baseball player C. J. Wilson, and, controversially, Metallica’s James Hetfield – straight edge hardcore remains remarkably underground. A few successful bands, such as Rise Against, Killswitch Engage, and Throwdown, have straight edge members. Still, since its inception, straight edge has spread around the world, with vibrant hardcore scenes from Indonesia and South Africa to Brazil and Sweden. What follows is a brief tour through straight edge history using some of the key bands and records to illustrate significant moments in the scene.

A four part documentary about the enigmatic Mike Judge and a pivotal moment in straight edge history when positivity met militancy.

Wood, Robert T. 2006. Straightedge: Complexity and Contradictions of a Subculture. Syracuse, NY: Syracuse University Press. Study of the many variations and changes in straight edge over time, based upon interview data and analysis of song lyrics.

Williams, J. Patrick and Heith Copes. 2005. “‘How Edge are You?’ Constructing Authentic Identities and Subcultural Boundaries in a Straightedge Internet Forum.” Symbolic Interaction 28(1):67-89.

Kuhn, Gabriel (ed.). 2010. Sober Living for the Revolution. Oakland, CA: PM Press. Collection of articles and interviews with straight edgers, scholars, and activists from around the world on the political potentials of straight edge.

Lahickey, Beth. 1997. All Ages: Reflection on Straight Edge. Huntington Beach, CA: Revelation Books. A book of interviews with many of the key musicians and other insiders who shaped the youth crew era of straight edge.