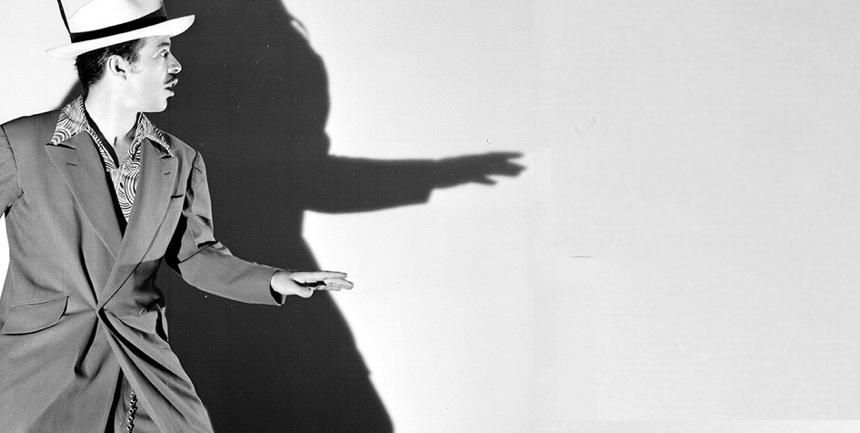 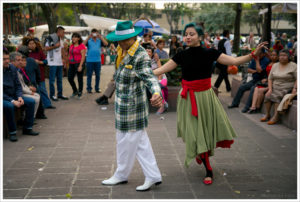 The Pachuco emerged in multiple places along the Mexico and United States borders, especially in the El Paso area (Cummings 2003: Cummings 2011).  In Pachucas and Pachucos in Tucson: Situated Border Lives, Laura Cummings argues that the early Pachuco subculture emerged in response to the violence and upheaval of the Mexican Revolution of 1910 as well as Anglo-American expansion and economic exploitation (2011). In addition, because the El Paso region became an industrial center at the turn of the 20th century, Mexican Americans flocked to this region to seek employment opportunities (Cummings 2011). 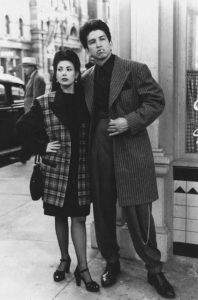 In studying the early Pachuco, researchers focused on the function of Caló language in establishing and maintaining the Pachuco subculture. Spanish gypsies, the original architects of the Caló language, drew influences from many languages through their world travels (Castro 2001). Furthermore, the Pachuco adapted Caló by combining English, working class Spanish as well as its own slang to terms to conceal illegal activities, such as drug trade, as well as conveying cultural meanings to create Pachuco speech (Anzaldúa 1987; Castro 2001).

Tacuhe literally translates to a “bundle of rags”, it’s more colloquially meaning is “trouble” (Cummings 2011). In studying the semantic dimensions of Caló language, Cummings traced the meaning of ‘tacuche’ in an attempt to gain insight into the origins of the zoot suit that has significant cultural meaning (2011). In doing so, Cummings uncovered interesting characteristics of the early Pachuco, and that the tacuche referred to a kind of prisoner uniform or slang for a man’s suit (Cobos 1983:159). From the semantic analysis of tacuche, Cummings concluded that the early Pachuco subculture involved different types of clothing among local town dwellers, harmful relations of power, and various forms of trouble (2011). For the most part, the early Pachuco subculture appears to have been a linguistic group rather than a subculture with a unique style.

With urbanization and industrialization creating economic opportunities in large cities across the United States, many Mexican American youth migrated from the borders to find work during the 1930s and 1940s. Because Los Angeles offered plenty of job opportunities, Mexican American communities grew in the inner city. Los Angeles soon became the site of one of the largest Pachuco subculture (Cummings 2011). Moreover, since the 1940s represented a period of progress for minorities, conservative groups also exercised their influence to stop these advances. Consequently, tensions between these forces and the Pachuco subculture produced confrontations and disturbances in Los Angeles. 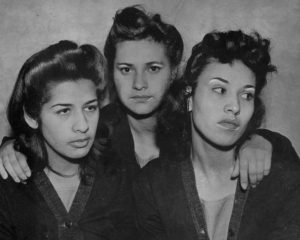 The Pachuco subculture attracted initial attention of Los Angeles authorities through the overt expressions of young Mexican Americans. Not only did their use of Caló – a secretive language that prevented locals from understanding their conversations – raise suspicions about their behavior, their appearance further reinforced the perception that the Pachucos refused to conform to American traditions (Barker 1971). The clothing style of Mexican American men symbolized protest against the American tradition. Pachuco men wore suits that featured trousers with a high-waist line and wide-leg cut that filtered down into a tight-cuff. The long suit coat with wide lapels and wide padded shoulders easily distinguished zoot suits from all other types of suits. Some men accessorized the zoot suit by wearing pancake hats and hanging long chain from their belt. They wore their hair long and slicked back creating a ducktail effect. Women, referred to as Pachucas, wore short tight skirts with their hair high and long. They also applied their makeup extremely heavy, especially around the eyes (Ramírez 2009). Eventually, the clothing of the Pachuco subculture would lead to major disturbances within Mexican American communities. 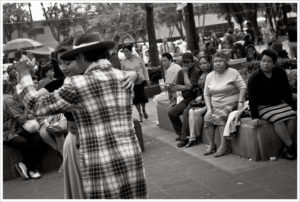 Pachuco music enhanced the tension between its culture and the mainstream. Pachuco songs portrayed the young Mexican American male as dangerous and arrogant (Daniels 1997:212).  Two such Pachuco songs, “Me Estaba Sonado un Frajo” (“I Was Getting Doped UP with a Torch”) and “Estaba Rolanda un Frajo” (“I Was Rolling a Cigarette”), both featured a young Mexican American man smoking marijuana with the police confronting them, highlighting their rebellious and delinquent activities. But not all Pachuco music reflected a spirit male dominance. Songs like, “Pachuco Boogie” focused on protesting the mainstream’s criminalization of Mexican American youth’s, in particular their use of marijuana (Avant-Mier 2010:27). Beside a form a protest, Pachuco music constructs a Mexican American youth identity that defies American racism and oppression (Macias 2001).

The Sleepy Lagoon murder, which allegedly involved members from the 38th Street gang, pushed Pachucos out from the shadows and into the public eye (Daniels 1997, Macias 2001). Following the arrest of 24 of Mexican Americans, and later the conviction of 17, racial tensions in Los Angeles heightened which soon lead to the zoot suit riots. The media characterized pachucos as gangsters, or cholos, committing crimes – thus labeling them as delinquents. Popular news outlets caused moral panics through characterizing all Mexican American youth as dangerous and criminal, leading to mass incarceration and exclusion from the rest of society. 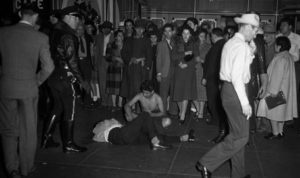 Like all subcultures, sociopolitical factors affected the Pachuco subculture. In December of 1941, the United States entered the World War II. With the entry into the war, the nation placed restrictions on the manufacturing of clothing in an effort to redirect economic resources toward the war effort. In March of 1942, the United States placed restriction on the production of wool clothing and in doing so, effectively forbade the manufacture of the zoot suits. But, these restrictions did not reduce the demand for zoot suits. Mexican Americans continue to consume zoot suits from black market manufactures leading to a polarization between the Pachucos and servicemen in the military. The zoot suit became a visible sign of Mexican American disrespect to the country and its servicemen through their open refusal to follow rationing laws. The defiance of Pachucos reaffirmed the notion that the Pachucos represented a minority group of outsiders and criminals among whites (Del Castillo 2009).

From this social-historical context, the zoot suit riots erupted in the early days of June 1943. After the violence between gangs of Mexican American youths and military servicemen, police arrested over 60 pachucos and placed them in the Los Angeles County jail. The Washington Post reported that: 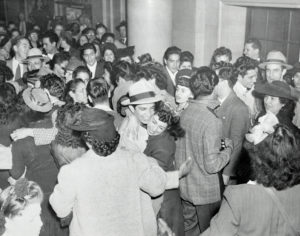 Celebration of rioters after being acquitted, 1944 from Bettmann/Getty Images

Disgusted with being robbed and beaten with tire irons, weighted ropes, belts and fists employed by overwhelming numbers of the youthful hoodlums, the uniformed men passed the word quietly among themselves and opened their campaign in force on Friday night.

At central jail, where spectators jammed the sidewalks and police made no efforts to halt auto loads of servicemen openly cruising in search of zoot-suiters, the youths streamed gladly into the sanctity of the cells after being snatched from bar rooms, pool halls and theaters and stripped of their attire.

The Washington Post’s account of the violence reflected the popular belief that violent and criminal nature of Pachucos, evoking readers to justify the beliefs of the servicemen to display their violence toward the Pachucos (Cosgrove 1984:81).

Over the next several weeks, servicemen continued their ritual of stripping down Mexican American wearing zoot suits – reinforcing their status over the Pachucos. The media continued to perpetuate the Pachuco stereotype of violent gangsters, never considering the possibility that the Pachucos were victims of a coordinated effort by the law enforcement and military servicemen.

However, Pachucos resisted the attempts of servicemen to damage their culture through a series of retaliatory acts: 1) slashing and disfiguring a sailor; 2) running down a policeman when he left his car to question a car load of zoot suiters; and 3) throwing stones to injure a trainload of sailors (Daniels 1997:81). The media continued to highlight the aggressiveness of the Pachucos while ignoring the fact that servicemen continue to attack and ambush Pachucos wearing zoot suits as they left movie theaters, stripping them down and burning their suits in the streets. As the situation worsened, press coverage argued attempted to reduce tension in the city by arguing this was not a racially motivated. The riots the Pachucos experience would represent the start of a new era of racial politics in the country. 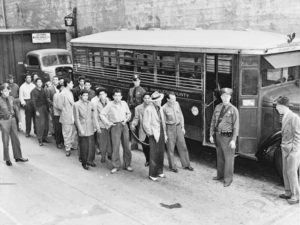 The oppressive acts of the Los Angeles ruling class demonstrated the practice of cultural hegemony. If we accept Thussu definition of cultural hegemony as the domination of subcultures by the dominant culture through the reproduction of beliefs, explanations, perceptions, and values to establish cultural norms and reinforce the status quo, then not only did the court system, law enforcement, and military service take part in subordinating members of the Pachuco subculture (2000:68), but the media also played a vital role in reproducing moral panics about the Pachucos to advance the prejudices and hate that reinforced their social inferiority (Strinati 1995: 168). In an article, the Washington Post rationalized the violence of vigilante groups of servicemen who were, “being robbed and beaten with tire irons… by overwhelming numbers of the youthful hoodlums”, the Pachucos, demonstrating that media outlets and journalists successfully constructed a Pachuco stereotype that vilified Mexican American youth as gang members and criminals and thus, justified the actions of the ruling white class (Cosgrove 1984:81). 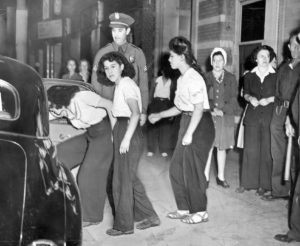 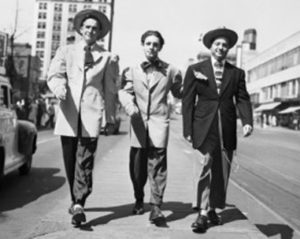 The hegemonic practices of the United States and marginalization of Mexican Americans contributed to the development of the Pachuco subculture. Consequently, the Pachucos used multiple forms of resistance to counter the authority of the dominant culture. Williams describes resistance as either passive or active actions taken to combat the power relations imposed by the dominant culture (Williams 2007). Through the use of the Caló language the Pachucos effectively resisted adopting the English as their language allowing the subculture to remain private in public spaces. Moreover, from the perspective of the dominant culture, the Caló became a symbolic form of pachuco resistance in their refusal “to conform to the status quo” producing “a distinctly racialized, working-class, urban youth style” (Ramíerz 2009:84).

An interview with Luis Valdez, famous Chicano playwright of “Zoot Suit”, a play based on Pachucos and the Sleepy Lagoon Murder.

A news story from PBS about the revival of the “Zoot Suit” play by Luis Valdez and its cultural impact on Mexican Americans and Pachucos.

A short documentary about one of the most famous fictional pachucos, Tin Tan. Many accredit Tin Tan for bringing the Pachuco culture to the public and to Mexico.

Pachuco Boogie music which uses both Spanish and caló, the pachuco slang language, to develop the sense of existing in between two cultures, Mexican and American culture.

Pachuco music drew influence from a variety of sources, namely African American and Afro-Caribbean styles with swing and Latin jazz, to create a unique style.

A New York Times article discusses the relevance of “Zoot Suit”, written by Luis Valdez, to the Chicano culture today. The play will begin production soon in response to the current political climate regarding Mexican Americans.

An article on the significance of El Pachuco in the “Zoot Suit” play by Luis Valdez on the Chicano identity that inspired a dance theater production to celebrate Pachuco culture.

Anzaldúa writes a collection of semi-autobiographical essays and poems to challenge the notions of identity and borders, and emphasize the social and cultural environment everyone inhabits.

Barker studies how language functions within society and the impact language has had on the bilingual Mexican American community.

Becker, Howard. 1963. “Definition of Deviance” in Outsiders: Studies in the Sociology of Deviance. New York, NY: The Free Press.

Becker provides basic theories of deviance, most notably on labeling theory that defines deviance as a social construction rather than an inherent trait.

Cummings provides a basis of how the Pachuco culture emerged and the important aspects of the subculture, like Caló, that allowed both Caló and Pachucos to spread across the United States.

Macias’s dissertation analyzes the various influences, from Afro-Carribbean to Latin Jazz, that make up the Pachuco Boogie, and includes historically and culturally significant events. 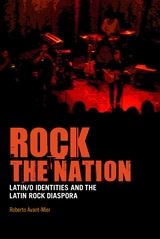 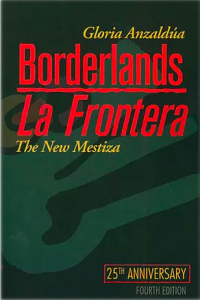 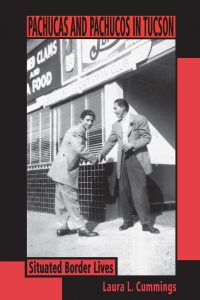 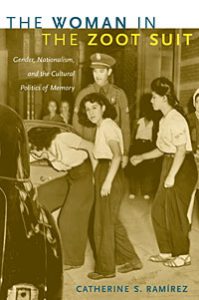 Valdez bases the incredibly popular and culturally impactful play, “Zoot Suit”, off of the Sleepy Lagoon murder, the subsequent arrests and trials, and the zoot suit riots. 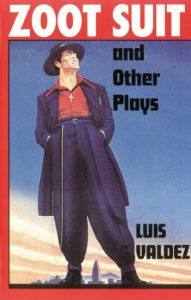