In the late 1960s and early 1970s, Britain’s post-war economic boom began coming to an end.  This period of economic decline continued into the early 1980s, marked by a rise in unemployment, inflation, and labor strikes.  During this time, options for working-class youths were limited, especially in the blue-collar industrial town of Birmingham. 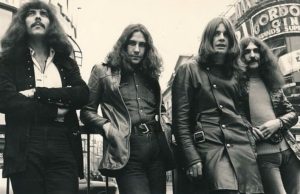 The members of Black Sabbath

From Birmingham came Black Sabbath, revered by many as the first metal band ever.  Their music gave voice to their experiences, “dead end prospects and boring school seemed to inspire a music that was steeped in rage” (Cope 2010, 97).   Heavy metal reflected the mood of the disenfranchised youths on the margins of society.  Like the emergent punk scene, heavy metal reflected an anti-establishment tone, but separate from punk would evolve into a genre embracing escapism and fantasy in a way that punk did not.  It’s mood and sound are heavily rooted in the Hard Rock of the 1960s, draw inspiration from groups such as Led Zeppelin and Cream (Pearlin 2014).  Factory life not only influenced the themes of heavy metal music but also the general tone as well-Black Sabbath guitarist Toni Iommi lost the tips of his fingers in a factory accident, and would loosen his strings allowing him to play easier.  This led to a darker, muddy sound.

Some sub-genres of Metal and artists associated with each genre 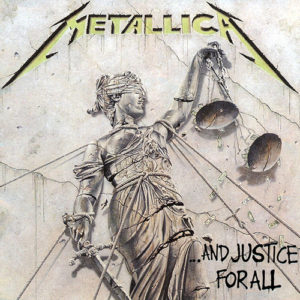 Metallica’s Album: And Justice For All

Metal music has gone through many phases in its history and many sub-genres have developed.  Deep Purple introduced speed metal with their 1969 hit Speed King, Iron Maiden brought soaring ballads and power metal, and Judas Priest brought lots and lots of leather.  Heavy metal began to disseminate globally, and from the west coast (Los Angeles and San Francisco especially) we got our first instances of hair metal, a genre defined by musical simplicity and showmanship (Pearlin 2014).  Perhaps the largest group to come out of this area in the 1980s was Metallica. Even as every member had the huge, teased out hair prevalent in hair/glam metal, Metallica is a thrash metal group, embodying the opposite of hair metal.  Metallica brought heavy metal to the forefront of popular culture, producing 3 number one albums in their 30+ year career.

Once metal became mainstream in the 1980s, the genre started to lose its edge.  Glam groups co-opted metal’s imagery for pop sounds.  In the 90s, even as thrash metal groups such as Metallica and Pantera achieved mainstream success, they could not eclipse groups like Nirvana who featured the newly popular grunge sound.  Throughout the 90s and 2000s, rap and hip-hop overtook metal’s rebel attitude, leading to the introduction of a hybridized nu metal genre.  A journalist for Observer, Bryan Reesman argues: “In recent years, however, despite many newer chart-topping acts, the spotlight has dimmed”.

Heavy metal music engages a variety of topics, from sex and alcohol to death and suicide.  Deena Weinstein suggests metal music can be loosely categorized into two themes: the dionysian theme, which celebrates the enjoyment of life as well as ‘sex, drugs, and rock n’ roll’, and the chaotic theme which involves much darker subjects, such as Hell, mayhem, injustice, and death (Weinstein 2009). Both themes are the source of controversy.

The label that began appearing on Metal albums

Heavy metal lyrics have been the subject of criticism.  During the 1980s, the Parents Music Resource Center petitioned U.S. Congress to regulate the lyrics in Heavy Metal.  This resulted in the “Parental Advisory” sticker seen on much of today’s music. They claimed heavy metal music focuses on violence, substance abuse, perversion, and Satanism (Walser 2014). In 1985, the group Judas Priest was sued due to allegations that subliminal messages in their music led to the suicides of two young men.  Another case was centered on the track from Ozzy Osbourne, “Suicide Solution”.

The population of the heavy metal subculture is largely white, cis-gendered, and male.  The 80s brought glam metal, which added a small number females to the culture.  Today, metal music is global, being most popular in North America and Northern Europe.  Popularity continues to grow among African Americans and Latinos, especially with the success of artists such as Tosin Abasi and his group Animals as Leaders.  Heavy metal fans go by several different names (Mosher, Heavy, Thrasher), but “headbanger” and “Metalhead” are the common terms referring to the members of this subculture. 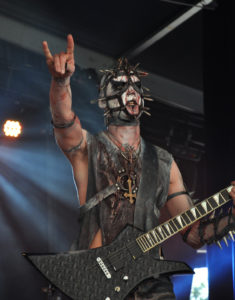 Deena Weinstein writes metal music forms an “exclusionary youth community” which is “distinctive and marginalized from the mainstream society”.  The strong masculine community relies on a code of authenticity like the punk scene to determine membership (Weinstein 2000).  Authenticity and fashion are two distinguishing features of the metal subculture. The style is loosely formalized, as it varies with each sub-genre, but defining characteristics are leather jackets, jeans, band t-shirts, body modifications such as body piercings or tattoos, and the metal staple, long hair.   Metalheads tolerate those outside its core base that still follow its code of dress and behavior, however lacking authenticity or sincerity will often lead to the labeling of a “poseur” (Arnett 1996).  To affirm authenticity, Metal fans attend concerts, buy albums, and contribute to Metal websites. These websites include forums such as MetalInjection.net and MetalSucks.net, in which fans discuss music, tours, and heavy metal news.

The metal subculture sometimes appears in mainstream culture.  Metallica achieved fame through the massive success of its Black Album in 1991, and groups such as Killswitch Engage, Slipknot and Megadeth have achieved more recent fame due to inclusion in the hit video game Guitar Hero.  Metal Music can be found everywhere, from the Atlanta-based group Mastodon to German Metalcore group Rammstein.  What follows is a brief sampling of metal music and culture that provides insight and understanding to the term “Metalhead”. 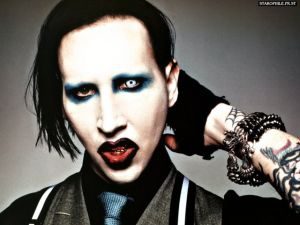 Heavy Metal is the subject of a moral panic centered around the idea that heavy metal music somehow increases the chance of suicide, especially in young adults.  The perceived connection between heavy metal and suicide is used by some to explain the increase in suicide rates in recent decades.  Moral entrepreneurs point to the genre’s references to societal and mental chaos as well as lyrical themes of suicide, homicide, and Satanism to back their argument (Scheel & Westfield 1999).  A vast array of literature exists on this subject, but in an empirical analysis Scheel & Westfield (1999) argue there exists no causal link between listening to heavy metal music.  Heavy metal fans have higher than average rates of drug and alcohol abuse, delinquency, recklessness, and a lower socio-economic status (Scheel & Westfield 1999).  These characteristics overlap risk factors for suicide, and make it hard to argue that heavy metal music causes suicide.  Like in many cases, moral entrepreneurs use mass media to advance an agenda against a group of people they do not understand.

Mainstream society dissatisfies most participants of subcultures, and they adopt a subcultural identity in order to have space to express themselves (Haenfler 2013).  Many youths who feel oppressed or ostracized from their peers might turn towards metal because of dark and bleak themes that appeal to disenchanted youth (Haenfler 2013).  Metal fans often take pride in the state of isolation and alienation.  They reject the goals and values presented by society (Arnett 1996). 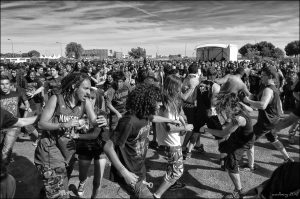 Moshing is a form of aggressive, hyper-masculine dancing that accompanies metal shows.

Aside from Glam Metal, hypermasculinity dominates the metal scene.  These themes include sexual power, domination of women, and risky behavior (Krenske & Mckay 2000).  Many of these themes could come from the socialization of young people to be independent.  For some, “independence becomes loneliness, self-sufficiency may shade into isolation, individualism may take an alienated form” (Arnett 1996, 16).  Arnett’s (1996) work points to the existence of some connection between alienation and masculinity.  Alienation creates variance in socialization, and heavy metal draws individuals because of its hyper-masculine themes.

Vh1’s history of metal.  If you have two hours, a great look at the history of the genre from the ‘60s to now.

When Metal Ruled the World

The story of how 80s Glam Metal rose to prominence on the Sunset Strip.

When Metallica Ruled the World

This film follows Metallica after its success with the Black Album.  A good look at the life of a Metal Star.

The members of Slipknot talk about their group and discuss why they wear masks during their performances.  They discuss their idea of metal culture.

This song was a huge hit for Sabbath.  Distorted guitar and heavy drums accompanied with lyrics about being a paranoid schizophrenic somehow led to one of the most recognizable metal songs in the world.

An original power metal ballad, Maiden sings of a trooper sent into battle, making use of fantastical imagery.  Also, they have lots of skeletons on everything.

A metal classic. A number one single from Metallica.  It was with this song that metal emerged into pop culture.

Another Classic, this thrash metal staple makes use of screaming vocals, and the lyric used to describe the attitude of many metalheads: “be yourself, by yourself, stay away from me”.

A more recent track from the Big 4 of Thrash Metal, this track is a good example of the Chaotic Theme, with lyrics exclaiming “God fucking hates me” as well as themes of suicidal thoughts.

An example of how metal has evolved.  It has been taken to the extreme in this track.  Featuring extremely distorted guitar and screaming lyrics, Cannibal Corpse pushes the definition of music with this song.

A track from the German group Rammstein.  This song is an example of the global metal culture.  You don’t have to understand the words to bang your head. 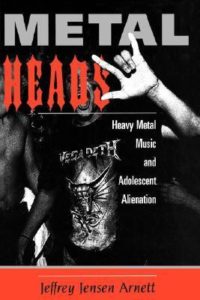 Arnett discusses the culture of alienation that is created within adolescents in the metal scene.  He also addresses the issue of suicide in youths that listen to this music. 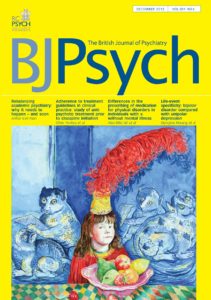 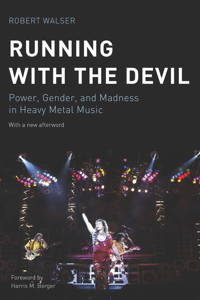 Walser considers the perception of heavy metal, and this source addresses many of the common critiques of heavy metal, such as how it could lead to violence and suicide in youths. 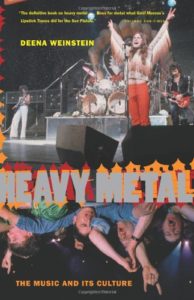 An entry from the British Medical Journal discussion the physical dangers of participating in ‘headbanging’.  Details the associated risks with performing authenticity.

This article examines the globalization of Metal, highlighting the multi-faceted landscape of Metal music in Germany.

An empirical study on the effects of Metal and Rock music and videos on the suicidal tendencies of youths.