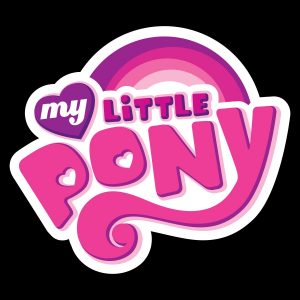 Although the show—as the original toy franchise—targeted little girls as its audience, it has attracted the interest of many adults—mostly men—who call themselves “Bronies”.  After the first airing of MLP in 2010, there was an instant response from the unlikely audience of adult men on the anonymous message board 4chan (Schimpf 2015).  The discussion of MLP on 4chan led to conflict among Bronies and non-Bronies who insulted those who enjoyed the show; arguments escalated enough that 4chan began banning any user who mentioned MLP (Schimpf 2015:148).  4chan has since welcomed Bronies back to the site with a board specifically for MLP posts.  However, the rejection of Bronies on 4chan led them to create their own sites such as “Ponychan” and “Equestria Daily” (Schimpf 2015) to discuss the show in addition to utilizing other popular sites such as YouTube and deviantArt to post fan fiction and fan art (Silverstein 2013:102).

The adult male interest in a show initially intended for little girls is not unique to Bronies.  Before there were Bronies, some adult men created a fandom around Barbie dolls.  Even more similar to Bronies, the show Powerpuff Girls—which was directed by Lauren Faust—had a strong adult male following due to the depth of the personality of characters in the show (Ellis 2015). 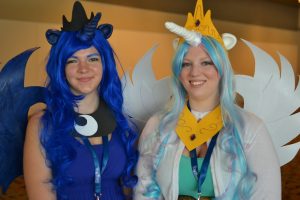 Because the Brony fandom is a largely online community, there is no geographic barrier for those wishing to participate.  Many Bronies prefer the online presence of the Brony community because it is a way to retain anonymity and avoid potential stigma.  However, the largely online presence of Bronies does not keep Bronies from coming together in person.  Every year since 2011, Bronies have held an annual Bronycon: a convention with vendors, contests, episode showing, and music.  New York City hosted the original Bronycon and brought together just over 100 MLP fans.  However, Bronycon has grown to having over 10,000 people in attendance at the most recent 2015 convention in Baltimore.

Bronies come from all walks of life but are predominantly men from the age of 15 to 35; they are typically educated and single (Gilbert 2015).  However, there are still plenty of Bronies who are female, trans, or non-binary or in committed relationships.  The fandom is increasingly attracting younger audiences, and it is not unusual to see middle-school-aged kids at Brony conventions.  Some female fans of MLP identify as “Pegasisters” or “Lady Bronies,” but they largely identify as just “Bronies” to not feel excluded from the Brony community.

The phrase, “I’m going to love and tolerate the shit out of you,” is common in Brony media and communication, and it exemplifies the Brony characteristic of inclusion.  Silverstein (2013) states that Bronies are, “kind, smart, understanding, tolerant, moral, friendly, harmonious, inclusive, respectful, caring,” and these aspects of Bronies are what create such a strong community.  A Brony I interviewed, a twenty-one-year-old male college student, claimed that it is the community that makes being a Brony special; everyone is fun and easy to talk to. 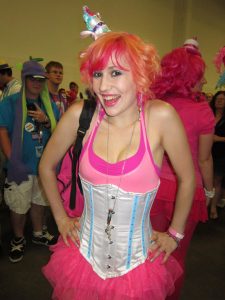 Gender in the Brony Fandom

Since MLP was created for little girls but Bronies are typically adult men, gender is an important aspect of the Brony fandom.  Scholars disagree on the role of gender in the show itself.  Gilbert (2015) argues that MLP is, “an aggressively feminized text.”  There is no doubt that the bright pastel colors, cheerful songs, and happy themes were originally targeted towards little girls.  However, Ellis (2015) claims that the presence of the feminine animation is irrelevant.  He states that the personalities of the ponies are so diverse that the show as a whole is genderless (Ellis 2015).  Pony personalities range from boyish to extremely feminine, so there is a range of gender expression in MLP.

Participants in the fandom and scholars have differing opinions on the gendering of Brony subculture.  One scholar pointed out after an analysis of the Brony website “Equestria Daily” that the fandom is inherently male.  One of the rules of posting on “Equestria Daily” is, “don’t be a dick” (Silverstein 2013); since the guidelines of “Equestria Daily” use gendered language, the Brony community is still somewhat gender-exclusionary (Silverstein 2013).  However, as a Brony expressed to me, while the term “Brony” is rooted in maleness (a derivation of the words “bro” and “pony”), the Brony community itself is gender-inclusive (Anonymous Brony 2016).  He explained that female, trans, and non-binary Bronies are not uncommon and that, “gender plays close to zero role in being a Brony” (Anonymous Brony 2016). 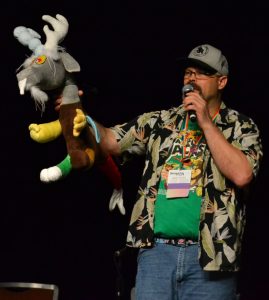 Dustykatt “The Manliest Brony in the World” at Bronycon Photo credit: Wikimedia

A common criticism of male Bronies is that they are “girly,” “feminine,” or “not real men.”  Hautakangas (2015) claims that the Brony fandom is a rejection of traditional masculine media which promotes “darkness and detachment.”  As a Brony told me, “watching candy colored talking horseys is a pretty interesting way of defying conventional [masculinity]” (Anonymous Brony 2016), but the simple act of men watching a “girl’s show” is only the overt resistance to masculinity that Bronies express.  Bronies have a more complex covert resistance to masculinity based upon the attitudes and personalities in the Brony community.  Men are often expected to be tough, cool, and to not express emotions (Kozlovska 2015), but the Brony fandom allows men to be more vulnerable.  Bronies are able to express themselves and the true way they feel without the fear of being humiliated by someone who claims to be more “manly.”  Bronies are honest with themselves and others and often share intimate feelings which creates the strong sense of Brony community (Kozlovska 2015).

Although some perceive being a Brony as extremely “girly,” participation in the Brony fandom and traditionally “manly” activities are not mutually exclusive.  The ranks of Bronies include rally car drivers, members of the armed forces, motorcycle enthusiasts, and bodybuilders (Anonymous Brony 2016).  In fact, at many Brony conventions, there are meet-ups among Bronies who have served in the military, showing that Brony fandom can be incorporated into masculinity (Gilbert 2015).  Dustykatt—a middle-aged man who has a handlebar mustache, repairs motorcycles, and is a former security guard and college football player—is known as “The Manliest Brony in the World.”  Dustykatt maintains a YouTube channel where he regularly posts videos showing his interest in MLP while still being a “manly” man.

Dustykatt explaining that he can be a Brony and be traditionally masculine at the same time.

Regardless of the acceptance and support Bronies encounter within the fandom, they face heavy stigmatization from outsiders.  The stigma associated with Bronies is primarily regarding sexuality.  As a Brony told me, even after years of being a Brony, “my mom still thinks it’s weird and pedophilia-esque” (Anonymous Brony 2016).  The pedophile stigma associated with Bronies is due to the heightened media attention to Bronies who consider themselves “Cloppers.”  Cloppers are Bronies who are sexually attracted to the ponies in MLP and create pony pornography.  Cloppers consist of a small minority of the Brony community and are frowned upon by most Bronies who do not identify as Cloppers (Anonymous Brony 2016).  The stigma is portrayed perfectly in an episode of the Howard Stern Show in which he interviews Bronies.  Stern only airs interviews with Bronies who were Cloppers, making it appear as if all Bronies are Cloppers.  Stern makes multiple references to Bronies being sexual predators and has an overall judgement of Bronies as losers who, “live with their parents” (Stern 2012).

Bronies are thus forced to manage the stigma associated with their identity.  A common strategy for managing the Brony stigma is distancing.  Bronies tend to put Cloppers aside in their own category that is not representative of the Brony fandom.  They recognize that Cloppers exist but distance themselves from Cloppers by claiming that pony pornography is not what being a Brony is about.  A Brony told me that being a Brony is, “definitely not something I’d tell someone I’m meeting for the first time, but in most cases I don’t try to hide or broadcast it too much” (Anonymous Brony 2016).  He has a knowledge of the stigma, so he does not overtly express his Brony identity, but he is not ashamed of the identity either.  Although the Brony stigma only describes a minority of Bronies, anyone in the fandom must find their own way of managing the stigma.

Season 1 Episode one of My Little Pony: Friendship is Magic

Season 1 Episode 2 of My Little Pony: Friendship is Magic

Trailer of A Brony Tale, a 2014 documentary directed by Brent Hodge with the helo of Ashleigh Ball, voice actor in MLP, featuring interviews with Bronies on the Brony fandom.

Trailer of Bronies: The Extremely Unexpected Adult Fans of My Little Pony, a 2012 documentary directed by Laurent Malaquais depicting the experiences of Bronies at Bronycon and how they were introduced to the Brony fandom.

Ellis, Bill. 2015. “What Bronies See When They Brohoof: Queering Animation on the Dark and Evil Internet.” Journal of American Folklore 128:298-314.