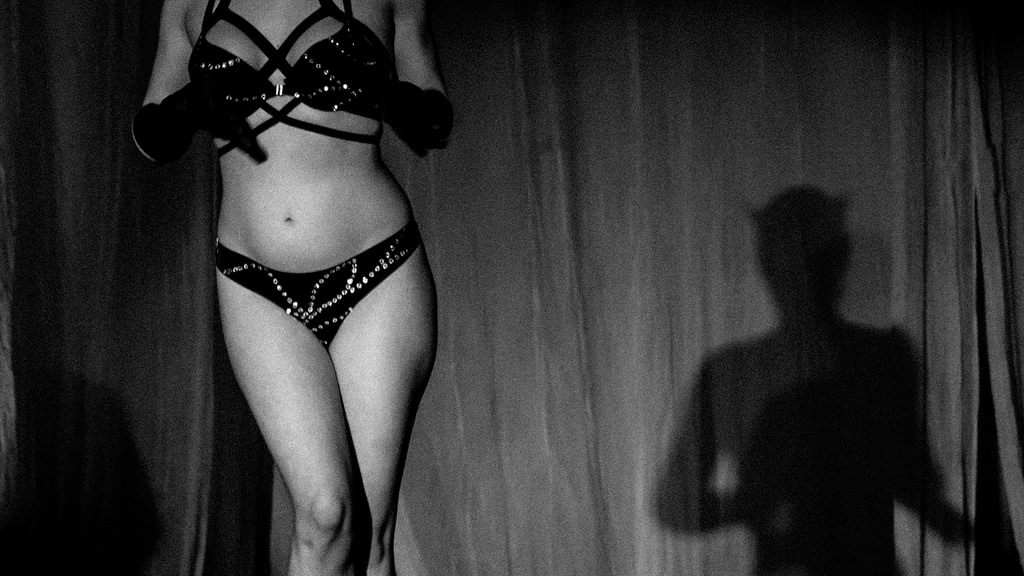 The Burlesque art form first came to North America during the suffrage movement of the 1860s with the British Blondes. In their act the British Blondes included elements of the now-popularized striptease, but also included dancing, singing, and political commentary (Wilson 2008). The troupe successfully established burlesque as a female based performance. The popularity of the British Blondes gave rise to other Burlesque groups, and it slowly became popular within Vaudeville tours, tours comprised of multiple performance groups traveling and performing together. But as Vaudeville tours waned in popularity, Burlesque had to evolve to survive (Siebler 2015). 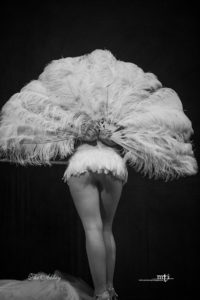 It was in the post-Vaudeville Burlesque that the widespread, intense, focus on the stripping element of Burlesque shows, complete with high class gowns, hats, and furbelows emerges (Siebler 2015). Shows like these were mostly popular at clubs or theaters in large cities. This is best exemplified by the Minsky Brothers Burlesque shows which originated in New York but expanded to many large cities such as Philadelphia and Chicago. The Minsky Brothers in particular helped to create the “high class” atmosphere around Burlesque by holding performances in Broadway theaters and other upscale locales, and by turning a substantial profit (Regehr 2011).  In 1934 the Mayor of New York City, Fiorello LaGuardia, effectively shut down the Minsky Brothers Burlesque shows due to  morally based concerns for the lives and moral well being of the dancers (Friedman 1996). This shutdown lead to a steady decline in the popularity of Burlesque. This decline occurred not only in New York where the Minksy Burlesque shows were most popular, but throughout the nation. This decline in popularity lasted all the way through the 20th century, with Burlesque shows practically disappearing in the 1970s and 1980s.

It wasn’t until 1995 that we began to see a revitalization of Burlesque. This newly revived art form took on the label Neo-Burlesque, in an effort to differentiate it from the earlier art form. From within the Neo-Burlesque subculture emerged two, often competing, styles of performance that remain popular today. The first style, generally coined as “vintage”, exposes the audience to a more historical or vintage view Burlesque, where costumes and strip teases remain center to the performance. These shows generally make no efforts toward political commentary or even under tones. The second style, “underground” burlesque, shifts the focus of the performance almost exclusively to feminist political commentaries, while generally including some aspect of the typical stripping performance. (Siebler 2015). While these underground shows might still include elements of the strip tease, each act has broader agenda than to physically stimulate the audience. 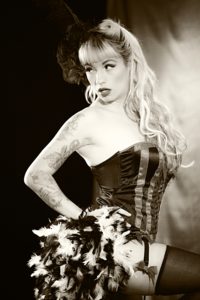 The vintage style of Neo-Burlesque is dominant in the subculture, and its rise in popularity has led to its heavy commercialization. We can see a rise in the demand for feather boas, nipple pasties, and revealing lingerie, often due to the popularization of movies such as Moulin Rouge! (2001) and Burlesque (2010). Because of the increased visibility of this side of the subculture, most of the main stream audience recognizes vintage burlesque as “real Burlesque” (Nally 2009). (Siebler 2015). This trend toward the mainstream and commercialization is best represented by one of the most well-known vintage performers, Dita Von Teese. Von Teese, the “Queen of Burlesque”, is joined at the top of the vintage burlesque world by performers like Michelle L’Amour who also does traveling performances in venues all over the country. Both Von Teese and L’Amour actively contribute to the mainstream direction of Neo-Burlesque as both have appeared on many day time talk shows, and Von Teese has even written her own coffee table book on her journey in the subculture. 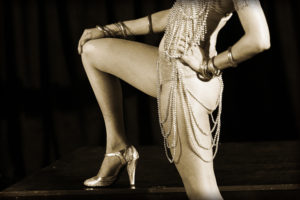 In moving towards the mainstream, vintage burlesque puts a heavy focus on the strip tease aspect of Neo-Burlesque. Von Teese, for example, is most popular for her Martini Dance performance- which begins with her fully dressed in a ball gown, and ends with her nearly nude playing in a huge martini glass. Similarly, Michelle L’Amour uses the tag line is “The Ass That Goes POW!” showcasing the focus on the sexual aspects of performance. By looking at these prominent figures in vintage burlesque, we can see the highlighted importance vintage burlesque performers put on the tease, and constructing an enjoyable style of performance for the audience member (Renouf 2013).

Where vintage burlesque is focused on all things sexy, underground burlesque is focused on conveying political messages through the performance, generally by in some way subverting the typical message of female sexuality (Siebler 2015). Performers have done this in many ways, depending on what broader message they are trying deliver through the performance. For example, when Doris La Trine performs her act ‘Birth of a Porn Star’ where she marks on her body with marker to indicate where cosmetic surgeons should cut, she asks the audience to consider how females are expected to fit in to molds of “sexiness” per the sex industry, who caters specifically to the needs and wants of males (Siebler 2015). 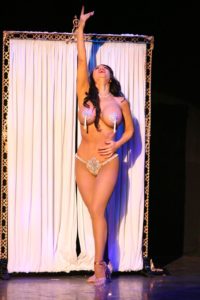 Other examples of underground burlesque include Poppy M Cherry’s performance to Tammy Wynette’s D-I-V-O-R-C-E, in which she starts in a wedding gown, looking downcast and then proceeds to take off everything from the gown to the wedding ring, casting divorce as a freeing experience that goes against all societal expectations (Nally 2009).

While it is important to understand the differences between these styles, it is also important to understand that there is no right or wrong way to do neo-burlesque. Neo-burlesque as a whole is a space in which adults of varying ages and figures can celebrate and show their bodies to the extent that they are comfortable (Renouf 2013). While these include traveling burlesque shows and groups, such as Australia’s The Burlesque Hour, and what we might call professional burlesque performers such as Dita Von Teese, Michelle L’Amour, and Doris La Trine, there is a wide market of burlesquers who are purely recreational and who consider these performances mediums to embrace their sexuality (Regher 2011). 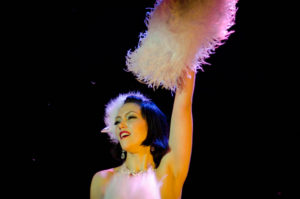 Neo-Burlesque is often characterized by its inclusionary aspects, including the wide body diversity of participants. Participants range widely in shape, size, skin color, as well as age (Blanchette 2013). It is also often characterized as being self-empowering for performers, especially those at the recreational levels of participation. However, there will always be burlesque performers who view burlesque, unless done in the underground style, as subtly oppressive and as a form of subjugation to the male gaze (Renouf 2013).

Social Class and Authenticity in Neo-Burlesque 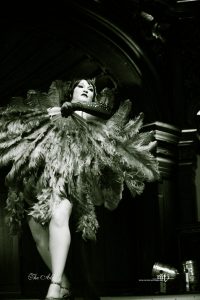 Michelle L’Amour, one of the most popular Vintage Burlesque performers, performing at Theater Bizarre, in Detroit, Michigan 2015.

One of the many How-To Burlesque Videos, perfect for at recreational Burlesque beginners, posted by Shorthorn TV. 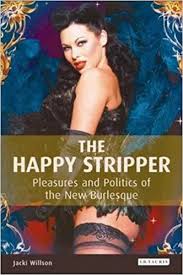 The Happy Stripper by Jacki Wilson, confronts the feminist politics that face Burlesque performers everyday and attempts to reconcile the two competing ideologies in Burlesque.

Wilson, Jacki. 2008. The Happy Stripper: Pleasures and Politics of the New Burlesque. 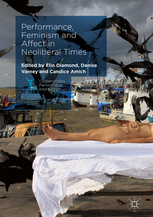 Performance, Feminism, and Affect in Neoliberal Times looks at feminist attitudes within the arts on an international level.

Friedman, Andrea. 1996. “‘The Habitats of Sex-Crazed Perverts’: Campaigns against Burlesque in Depression-Era New York City.” Journal of the History of Sexuality vol. 7, no. 2, 203–238. 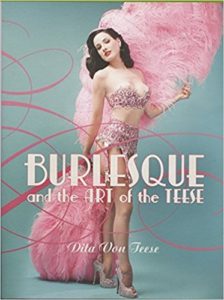 Dita Von Teese’s book on her own journey through the Burlesque subculture.